Pool Champion is a unique and innovative pool simulation that unfortunately suffers in the marketplace from the mere fact that Celeris/Interplay's Virtual Pool is technically superior and better-marketed. The idea behind the game is original, and is one that sport game publishers should consider: combine a good pool sim with the atmosphere of a role playing game. The player interacts with different opponents, who deliver shots of character dialog as well as the more traditional pool shots. Starting with only 50 bucks, you've got to hustle up enough dough to get to Las Vegas for the National Nine Ball tourney. That means playing -- and betting against -- a slew of opponents in places like Dave's Chopper Club and Matt's Billiard Hall, as well as choosing when to pay for lessons or a better cue to improve your game. As you make your way through the game, your opponents get tougher, the games more diverse and specialized. You'll need a lot of practice if you're going to win the cash.

The simulation itself is quite good, with a smooth interface and complete control over the cue speed, angle, and ball english (yes, you can even attempt the infamous "Masse" shot). Well-modeled ball physics result in a game that feels "right". There are eight game variations offered. Role-playing elements are well implemented, and creates a solid "career mode" feel that is missing in most pool games. The game could use more character voices to enhance the atmosphere, although the silence isn't particularly annoying. All in all, Pool Champion is a solid pool sim that may not offer the elegant interface of Virtual Pool, but more than makes up for it with well-integrated RPG elements. What really gives Pool Champion a flavor all its own is the need to learn new games and beat a series of increasingly skilled opponents. Definitely well worth a look, especially if you wish pool games had more character and long-term play value. 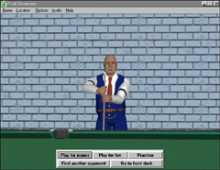