Planet Football is an ambitious soccer game that tries to beat EA's classic FIFA Soccer, but falls short in many areas, most notably poor player controls and inexplicable AI quirks. The game is only good enough to appease soccer fans through the early option stages, but when the match starts where it really counts, the game fails miserably.

Not that the game has nothing going for it. There are dozens of national teams you can pick, ranging from the obvious (Brazil, England, etc.) to the lesser-known (Bolivia and USA). Each team comes with real national team players (as at 1994), with believable stats and appearance. The players move in a reasonably realistic manner, thanks to shaded polygonal graphics. Unfortunately, Overall, a dodgy game that suffers from over-ambition-- not a Real Dog, but comes very close to that (dis)honor. 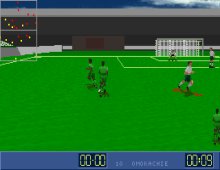