The Patrick Polly Swooshball Challenge is an innovative, but ultimately banal, blend of tennis and Pong, mixed with elements of air hockey. Played in the style of tennis, your objective is simply to hit the targets behind your opponent's back with the ball. The target in the middle is worth ten points, and the ones on the side are worth five points. At the center of the court, there is a magnetic field that changes the ball's direction when you hit the ball close to it.

Although the game looks interesting and the concept quite unique, Swooshball Challenge becomes quite a mundane sports game after the novelty wears off. It's not that different from tennis, doesn't require all that much skill (except to use the magnetic field to your advantage), and doesn't provide enough twists or complexity for long-term play value. Perhaps that's why the game was released as freeware by UDS. Overall, a decent game you might have fun toying with during coffee break, but lacks the longevity to last on your hard drive. 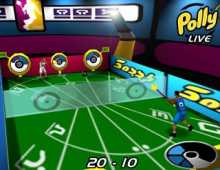