Compete in a decathlon tournament with up to 5 opponents. This was the first sports game I played, and even though the keyboard controls were too sensitive and the graphics hard to see, it was still a lot of fun. Decathlon also features a great feature that would later become one of Microsoft's hallmarks: comprehensive tutorial and on-line help. Co-operation with IBM, (un?)fortunately, didn't stand the test of time. 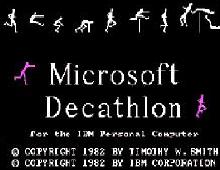