Low Blow is a fun boxing game by Synergistic Software. Game graphics are ok with big nice boxer sprites, even though the animations couldn't be described as being fluid. Fighting against computer opposition usually ends up in trying to "low blow" your opponent or in trying to hit him with special patterns, being different with each of the opponents. These patterns can be learned by doing a little training session before the fight. Low Blow probably doesn't play as well as the popular 4D Sports Boxing, but as the game title suggests, it doesn't take itself too serious and is fun for a while. Actually, it's completly crazy! :) Highly recommended!

Great boxing game from EA sports. "It's in the game!" and that's for sure. You can play against eachother or against the computer. You can defend yourself and walk around your opponent and giving him some nice punches.

There are to bars at the bottom of the screen in which you can see how much you can hold up, but also how long you can punch the opponent, but be careful, with one punch you could be lying on the ground... 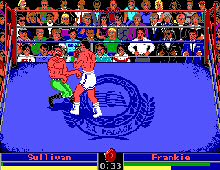 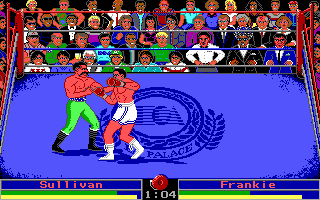