Kunio-kun No Nekketsu Soccer League (roughly translated as "Hot-blooded Kunio-kun Soccer League") is a superior sequel to Technos' better-known Nekketsu Koukou Soccer (released in the US and Europe as Nintendo World Cup Soccer). The story is negligible, but if you are curious: Kunio and friends from Nekketsu High School want to compete against teams from other countries and win Technos Japan Cup, which would prove that they are the world's #1 team. But in order to enter the tournament, they must first compete in and win the Nekketsu Soccer League.

First, make no mistake: this is not a realistic football simulation. It's definitely not a management simulation, but it's also not a realistic arcade-style football game, and was never meant to be. The closest PC game is Sensible Soccer, but even that is much more realistic than Kunio-kun No Nekketsu Soccer League, which is all about offbeat humor and exaggerated fun (lightning knocking players down, for example) that characterize Technos games.

The basic gameplay is the same as Nintendo World Soccer: you control one player at a time (usually Kunio), and give instructions to the others. The game is much better than Nintendo World Soccer in all respects, though: it boasts much greater gameplay depth, more wackiness, more moves, more super shots, and even weather effects. The only thing lacking in the game is the limited choice of teams to play: in 1-player mode you can only play Japan, and in the 2-player mode you can only pick from 9 teams present in the game.

The controls are very easy to learn, but hard to master. And the action on the pitch, as one would expect from a Kunio-kun game, is fast, furious, and a lot of fun. There are some strategic elements involved, such as changing team formation, but by and large it's your aptitude with the joystick that will decide the outcome. In addition to many cool super shots you can pull, you must also contend with the weather (which you can check before the match). For example, players can get caught in a tornado and tossed around the field, and knocked down by lightning bolts. When lightning zaps the ball, it turns it into an electrified ball, with dangerous and unpredictable consequences. After rain, the players can sink or slide into pools of mud or water. You can even choose what kind of "victory dance" to perform in front of the audience when you score.

Kunio-kun No Nekketsu Soccer League is by no means a serious soccer simulation. But if you're looking for a football game that is just plan fun to play and funny to watch, it's the only game of its kind. Thanks to the efforts of PentarouZero, English gamers now have the chance to experiene this game in English for the first time. 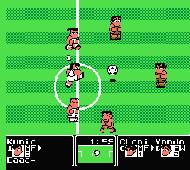 People who downloaded this game have also downloaded:
Karate Fighter, One on One (Jordan vs. Bird), Sensible World of Soccer: European Championship Edition, NBA Jam Tournament Edition, Empire II: The Art of War