Given the popularity of one-on-one fighting games, it is disappointing that PC games based on actual rules of oriental fighting sports such as karate or judo are few and far between. Since the days of EA's excellent Budokan and Epyx's World Championship Karate, there have been far more "unrealistic" fighting games that feature superhuman powers and attacks. Wildly popular Tekken series comes closest to replicating the fun of "real-life" kung-fu fights, but even those games are not based on actual rules of any Oriental fighting sport.

Along comes ValuSoft and Inca Gold's Karate Fighter, a 3D fighting game that promises to bring the fun of World Championship Karate to the 21st century. Unfortunately for all its 3D eyecandy, Karate Fighter is nowhere near as fun as the CGA classic. The animations of fighters are choppy, the movements are not even as smoothly realistic as characters in Prince of Persia 2, and the computer AI leaves a lot to be desired. I found that I could beat computer opponents many times by pressing attack keys randomly, thus making the challenge moot. All in all, this is a disappointing, below-average game that could have been much better with more polish and careful attention to gameplay. As it stands, PC gamers will still have to wait for a decent kung-fu/karate game. 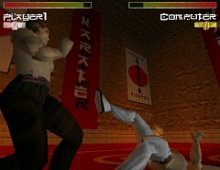