JetMoto is a good PC conversion of a Playstation futuriastic bike racing game of the same name, developed by now-defunct SingleTrac for Sony Interactive. Despite the futuristic setting, the game boasts "true physics" model, and by and large this is apparent. The jetmotos handle much like bikes in the real world, and it will take you a while to get used to the inertia and friction effects. The tracks are all well-designed, and are very difficult - especially since you cannot stop at all without crashing. Even in the easiest mode, computer drivers are very hard to beat. This makes JetMoto ideal for racing experts, but frustrating to beginners.

There are many nice details in the game that give JetMoto a lot of character. For example, each jetmoto is sponsored by a major company, and if you perform poorly you will have a hard time getting sponsored. The techno/rock music tracks are also much better than most of game of this type: they are loud, but not offensive. If you enjoy futuristic racing games in the same vein as light cycles in Tron, you will have a lot of fun with JetMoto. If you have a Playstation, though, you should probably play the Playstation version instead for smoother gameplay and slightly better graphics. Highly recommended! 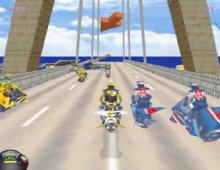