The third game in Accolade's famous baseball series, Hardball III was the first baseball game developed by Canadian company MindSpan for Accolade. The leap between Hardball II and this game is even much bigger than the one from Hardball to Hardball II. In addition to upgrading the graphics from EGA to 256-color VGA, MindSpain improved every aspect of gameplay and added a few new features, most notably coaching options. Fluid player animations, dozens of teams to choose from, solid user interface, and even authentic ballparks and crowd jeers and cheers-- it just doesn't get much better than this. Oh, and did I mention Al Michaels biting his tongue in the game? ;) Adding the famous commentator adds much to already fun atmosphere, and makes it that much more enjoyable to score a home run. Overall, one of the best baseball games ever made, bar none. Those who enjoy realistic statistics should stick to Earl Weaver Baseball 2, but it you're looking for a gorgeous-looking, action-packed baseball game, it doesn't get better than Hardball III. Also, check out its SVGA successor Hardball IV if you prefer even better graphics.

Nice baseball game. Lots of options to fumble with. Fun voice who follows you all the game :). Good graphics and very fun to play. 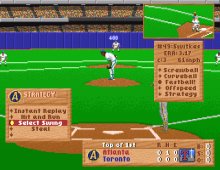 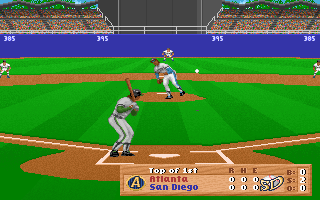