Grid Runner (released as Grid Run in Europe) is a fun futuristic sport game that was much more successful on console systems. You play Axxel, a space investigator sent on a mission with your partner Tara to an asteroid field to find out why ships have been mysteriously disappearing. While investigating a ship in the asteroid field, you discover that the ship is not deserted after all, but is in fact a trap set by the evil empress Vorga. You are forced to play her deadly sport in a multi-dimensional world from which there is no way out.

The game plays like a cross between "capture the flag" and a game of "tag." Your goal is to capture a given number of flags on each level. When you are "it," you are not allowed to collect flags, but instead must tag your opponent so you will not be "it" any more, and can collect flags again. It's like playing a game of tag with your friends, only with guns and explosives. The interface and gameplay of Grid Runner are very easy to learn, thanks to the built-in tutorial which takes you through the first level of the game.

There are several differences between your ordinary game of tag and Grid Runner. On each level there are green, red and blue balls laying around which increase your performance. The green balls increase your speed, red your magic and blue your agility. When you collect magic points (i.e. red balls), you gain one of the following six abilities: build a temporary bridge, drop an explosive, slow your opponent, fire a weapon (which can be upgraded), gain a temporary speed boost, or teleport out of danger. Your success in the game hinges on using these magic abilities at the right moment.

Although the premise is original and the game quite interesting, the game is unfortunately too easy after you play it once or twice. This is mainly because the computer players' movement patterns are very easy to figure out. Therefore, the best way to play the game is against another human player - preferably one whose skills are similar to your own. If you are looking for a challenging sports game, Grid Runner is not a good choice. However, if you are looking for an original and fun futuristic game to play against a friend, Grid Runner is recommended. 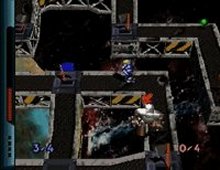