Grand Slam is a disappointingly average baseball game that promised much more than it delivers. Baseball guru Tasos Kaiafas of GameSpot says it all in his scathing but fair review:

"A couple of years ago, Grand Slam started out as a baseball game with a lot of potential, but somewhere along the way it veered off course and into mediocrity. The Show, as Grand Slam was known then, planned to introduce new and welcome methods of game control, taking a page from golf simulations by adapting the swing meter to a pitch and bat meter. Many sports game fans delighted in the prospect of receiving a baseball game with that much player control and waited patiently for its arrival.

The pitch meter is still in there, but is not as effective as it could have been. It is designed similarly to a golf swing meter - click once to start, once for power, and once more for release. But, unlike the golf swing meter it was based on, the variables of the pitch meter seem to have little impact on the actual pitch. Power only seems to affect a fastball by a difference of about 10 mph, and the release timing does one thing only: It adds an element of randomness to its location around the strike zone (although it does seem to slightly affect the velocity as well). Unlike the typical golf swing meter, missing the release zone early or late has the same effect. What would make this meter more interesting is if it had a similarly predictable effect as the snap does in a golf swing, where the pitch would always err in some way.

The bat power meter works fine, since it is only used to affect the power of the swing, but even that could be improved by linking it directly to the size of the hit zone. In the early version of the game, the hit zone would expand and contract according to the player's hitting ability. But for some reason, the hit zone is always the same size. It would be great if the size of the oval was determined not only by contact ability, but also the power of the swing: a softer swing would mean a better chance of making contact, expanding the hit zone, and vice versa.

As for just about everything else in the game, it's average at best. Only the core statistics for players are included, and even those are frequently inaccessible due to many interface oversights, the worst being that you can't access statistics during the game - you can't even check to see what side of the plate a batter bats from. The graphics are functional but nothing stellar (even with a 3-D video card, which Grand Slam supports through Direct3D), as is the audio, and the simulation is one of the worst to come around in a baseball game in a while. Worst of all is that you can't play through multiple seasons. Lastly, even with the strength of a game publisher like Virgin, it could not or did not get the Major League Baseball team license, opting instead for chintzy logos and no team names.

One has to believe that programming difficulties and time constraints must have led to a hasty release of this first Grand Slam, considering that the best features of the game - the pitch and hit meters - did not live up to their obvious potential. Virgin's NHL Powerplay had growing pangs with its inaugural '96 version, but from early indications many of the problems will be addressed in the 1998 version. We'll have to hope that Grand Slam likewise gets the chance to mature by next season." A novelty, but little else. 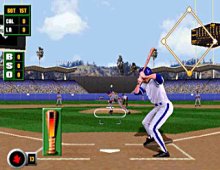 Grand Slam (a.k.a. Show, The) screenshot