Does the name Dino Dini mean anything to you? Of course it does! The creator of legendary Kick Off games left Anco and started his own company. Shortly after he creatd Goal!, one of the best football games ever created! You don't trust me? Well, ask any Amiga fan about it and listen to what they have to say!

Goal! offers numerous playing possibilites, great variety of moves, kicks, players, styles... The action is incredible intense, the gameplay is fast, the joy is high! Goal! and Sensible Soccer are very much alike and I can't say which one is better. Just get the game and try it. It is fantatsic!

Arguably the best soccer game ever made, Goal! is the last soccer game by Dino Dini, the meistro behind such classic soccer games as Kick Off series and Player Manager.

The hallmark of Goal! that sets it apart from previous soccer games (as well as most soccer games on the market even today) is the intuitive ball handling, the cool running patterns, smooth and fast graphics, and a staggering variety of possibilities with or without possession of the ball. And all it requires to do your scissor kicks, dribbling, long or short passes, headers, tackles etc. is a joystick with one button. Graphically, the game may look dated compared to latest 3D-whiz bang offerings, but when it comes down to playability, very few (if any) soccer games have since surpassed it in terms of speed, playability or intuitiveness of controls. On-the-pitch action is seen from two possible angles: God perspective, or vertical perspective. My favorite, and the most enjoyable gameplay-wise, is the God perspective, since it allows you to view your players from a much more favorable angle when it comes to ball handling, defense and offense. You don't get to see the entire pitch at once, but have the opportunity to use a "radar" like mini-map as you play, to get that nice breadth of view. Very nice!

Off the pitch, Goal! surpasses Dino Dini's earlier classics by offering a full range of coaching options. The game features English, Italian, French, German and many other leagues. You can set up your own league and cup competitions, pick up to 32 teams at once from a pre-defined list of 144 or create your own, choose from a selection of different pitch types, weather and wind conditions, officials, and the length of each match. Obviously the teams are not up to date, but you get the chance to play with great players like Eric Cantona and Van Basten-- all of whom have unique stats. Different pitches (e.g. dry grass vs. muddy) demand different game play and tactics, adding an extra dimension of challenge. Beginners can choose to play against easy teams (there's three different preferences) and one of five different speed levels, ranging from Amateur to Ace. The single player can play tournaments, practice penalty shots, practice or play in arcade mode. Two-player action is one of the best I've ever seen in a game. Last but not least, action can be replayed at any point, and saved to disk to create your own match highlights. Suffice to say that all you could ever hope for in an arcade-style soccer game is here, and the game's array of coaching options is far superior than many soccer management sims.

All in all, Goal! is definitely on of the rare soccer games that truly stand the test of time. Even today many people still enjoy participating in tournaments or a one-match challenge. The bottom line is: if you've never played this soccer classic, don't call yourself a soccer fan :) 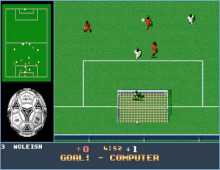