Galactic Gladiators is a fun galactic sports game from SSI that unfortunately didn't do well in stores. More akin to a wargame than a sports game, Galactic Gladiators has a simple goal: survive in battle. You first pick a group of aliens, then lead them into battle with other computer-generated and controlled teams. If you survive, you gain valuable experience that will increase your chances in the next battle. The AI is competent, and you can also draw your own battlefields and make up little stories about the fights. Overall, a great game in every respect that is unfortunately starting to show its age... but hey, it was programmed years ago in BASICA :) 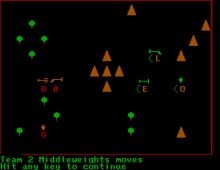