Final entry in Addictive Games' highly underrated series of soccer simulation that began in 1983 on the Spectrum computer, Football Manager 3 is a disappointing game compared to Football Manager 2. It is not a bad soccer sim by any means, but given their track record, Addictive could make a much better game.

Football Manager 3 feels like a game that was rushed out the door too soon to meet the deadline. It has vastly inferior presentation and graphics than FM2, and infuriatingly long waits before the computer player makes its move. The match sequence in Football Manager 3 is downright ugly, consisting of a tiny little rectangular pitch and little stick players who are even smaller than the ones in FM1. The action is accompanied by inane and quite tacky commentary along the lines of 'Number Six has the ball', 'Number Ten goes in for the tackle', etc. Fortunately, the game has enough statistics and options to be passably realistic, and all the excellent coaching options that made FM2 an instant classic are left intact: you can train players individually, plan elaborate tactics and formations on the pitch, and so on.

Overall, fans of soccer management sims who have never played a Football Manager games before will definitely enjoy this last game in the series. Fans of the previous games will be disappointed at what is best described as an anticlimax to the series that could have been avoided with more play-testing and fine-tuning of user interface and presentation. As it stands, though, Football Manager 3 still packs enough punch to keep your interest for a few hours?until you get bored and go play On The Ball or Championship Manager instead ;) 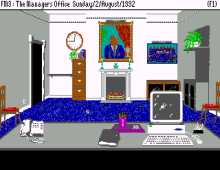