Football Manager 2 is a great sequel to Football Manager 1, one of the world's first soccer management classics on the Spectrum computer. Originally released by Kevin Toms on his own Addictive label (later swallowed up by the mighty Prism Leisure corporation), way back in 1982, FM sold consistently well, although it's taken Toms over 5 years to produce a sequel. Still, patience is indeed a virtue, for Football Manager 2 adds a lot of features that will make fans of soccer management games squeal in delight. Your tram now plays to the style and formation that you select and you can actually watch and assess the performance of your individual players. There is skillful passing, tackling, crosses, lobs into the net, diving goalkeeper saves, close marking, close passing play, kick-and-rsuh - in fact an infinite variety of action. Tactical changes include man to man marking, choice of formations and substitutions. Other enhancements include League Cup matches, full 92-team league, Sponsorship, Success points, Goal scorer display, Enhanced transfer marker, training etc. There is an endless variety of technique of playing this game and I'm sure you will enjoy developing your own Football Management style. Half time now becomes a particular boon. Here you can swop around your team, or bring on a substitute, if you feel that your tactics aren't working. if there's a weakness in your midfield, for instance, you can put a better player in the vulnerable position, or even bring in an extra player and drop, say, a striker. This means that watching the match is not the chore it always was, but both fascinating and absolutely necessary if you're going to learn from your mistakes.

What makes Football Manager 2 addictive is the same success factor as other good soccer sims: its structure is basically sound, and matches play out realistically. Internal logic is the be-all-and-end-all of this sort of game - lose it and you lose all attempt at credibility. For connoisseurs, I'd say Football Manager 2 has ruthless logic (the game offers 10-- count them-- difficulty levels to choose from), making it a challenge for players of all skill levels. If you like soccer management games, this is a must-have. 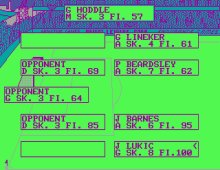