Hah, what an incredible game! It is called Soccer, but all it has in common with the world's most popular sport is the ball and the goals. I could even say that this is an arcade, not a sports game...

The game is played on a field with three players on each side. The goal - score more goals than the opponent, of course. It is impossible to control the ball, you just keep kicking it around and hope it gets into the goal. Have fun!

A fast, fun, and strangely addictive three-on-three arcade soccer game. No complex controls or maneuvers in this game - there's one button for shooting, and another for changing the active player. Great for a coffee break, but don't be fooled by soccer appearance -- this is a straightforward action game ;)

Final Soccer Challenge is a very addicting football game despite being very simple and the little impact you actually have on the game. Each team has three players where you control one of them. The other two run around looking like they are playing football because they really aren't as they only help you very little (they did manage to score one or two goals in my 15-14 victory against the computer when I played the game the game for the first time.

Unlike many other football games you can't actually run with the ball - at least it is very hard to do so. Instead you shoot to the ball each time you touch it and then you just hope it is getting near the opponents goal. You can only shoot in the direction that you are running and because you shoot to the ball fast it is very hard to actual have a good control of where the ball is going although you get more used to how it is after a few matches.

To be completely honest with the game it is now a game that offers a lot of gameplay but the few minutes it lasts it is good entertainment and it is a very fun and challenging game in the two player mode included because of the random shooting around and I can imagine that many people will enjoy this if they are playing against another human player. Both the graphics and sound are decent as well although nothing like the FIFA series from Electronic Arts. 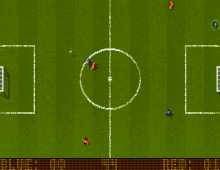