The first hiking game ever made for the PC and also one of the most ambitious, Final Assault (a.k.a. Chamonix Challenge, older European release) attempts to simulate the experience of hiking Western Europe's largest peak Mont Blanc from Chamonix, one of France's most popular winter resorts.

Despite the game's attempt to be a "realistic simulation" of the sport, actual gameplay is mostly arcade-oriented: similar to Epyx' sports games, reflexes and timing are key to success when you climb the mountain. This is perhaps unavoidable, since the PCs of 1987 probably were not powerful enough to assimilate the hundreds of factors that are required to realistically simulate the experience. Still, the game goes beyond being a mere action flick. For instance, you can choose the path to hike from, and you need to constantly check the weather and budget your energy lest you collapse (or worse, fall off the cliff) midway up the mountain. Overall, Chamonix Challenge is a good attempt at tackling a difficult, complex sport. It may not stand the test of time very well, but it's well worth a look if you're interesting in hiking. 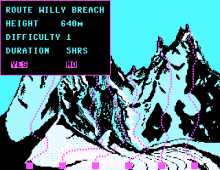