Death Drome is a fun, although a bit simplistic, futuristic first-person action/sport game that deserves much more attention than it received. The plot, set in a far future, is nothing special: the year is 2057, and the world's prisons are teeming with vicious, condemned criminals. The Committee of Recreational Termination (CORT) has devised a lethal form of entertainment called DeathDrome, where lucky cons like you are given the chance to win freedom if you can survive three rounds of gladiatorial combat in each of the eight deadly super prisons.

Gameplay is straightforward: first, choose a combat vehicle ("runner") and off you go to a battle to the death. There are 8 runners to choose from, each with its own attributes (for instance, one may be more durable but slower than others, etc.). Each super prison is made up of four Domains, each one being unlocked as soon as you finish the three rounds. There are plenty of weapons and bonus items such as extra-life credits, along with the usual DOOM-style elements, such as different colored keys that unlock secret doors, temporary invincibility, etc. Nothing special here, although the Skorch Missile and Shockwave weapons are a lot of fun to use. Strategy also plays a role (albeit minor), since you can only three weapons at any one time.

Despite the simplistic gameplay, the game's highlight is the excellent level design. Each domain has distinct characteristics and pose different challenges. 'The Well' deserves special mention for its cool futuristic setting and devious maze-like corridors. It also supports up to eight-player network play, although a two-player modem mode is unfortunately missing.

Graphically, Death Drome could have been better. The vehicles are quite blocky, and overall level designs lack the detail of Quarantine, a much older game. Fortunately, the game offers some tough opponents that aren't so easy to kill, and the nice level design should keep you occupied for some time. That is, until the repetitiveness of the gameplay kicks in and your attention wanders off to something more interesting, like Rocket Jockey. An above-average old game in all, but not a Top Dog. 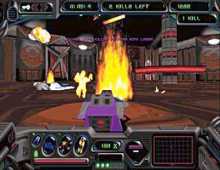 People who downloaded this game have also downloaded:
Twisted Metal 2, Necrodome, Lord of the Rings 1: Fellowship of the Ring, HyperBlade, House of the Dead 2, The