CyberRace is a very stylish cyberpunk racing game featuring the designs of famed artist Syd Mead (best known for his sets for Blade Runner the movie). Although storyline is superfluous in this kind of game, it is still handled with considerable flair in CyberRace. Essentially in the future, all interracial arguments (e.g. between Earthlings and alien races) are settled on the "CyberRace," a racing game where making your opponents' cars burst into flames or fall of the track is not against the rules. You play Shaw, the son of a terran CyberRace champion who was killed in a suspicious accident. As you enter the competition to try and avenge your father, a conflict of interests surfaces around a mysterious wormhole. Your purpose shifts dramatically when a Terran technocrat kidnaps your girlfriend, and forces you to race for the Terran cause.

The game consists of racing in several stages created using the "Voxel space" engine (similar to NovaLogic's games). You have to try to win as many races as possible, while trying to get your girlfriend back and uncover the sinister plot behind the tournament. The races are played from the first person perspective, and the best thing about the game is excellent car designs—thanks to Syd Mead. You can use the money from winning races to buy weapons for your car and better equipment.

Gameplay is very arcade-ish and only marginally better than an average action racer. An almost complete lack of realistic factors such as friction or momentum in the game makes you feel as if you are simply controlling a rolling ball as opposed to a car, so all you have to do is turn the wheel and watch out for other opponents' attacks. Still, the game does have an excuse of being a "futuristic" racer, so if cars handle like balls in the future - well, who are we to judge? ;)

The FMV sequences that appear between stages to advance the plot are decent, although most of the acting is over-the-top. (too bad you can't see them in this CD-rip version). Overall, if you like arcade-oriented racing games or driving games set in the future, give CyberRace a try. It's not the best of the genre by any means, but it is still far and away better than most similar games (e.g. MegaRace), and blasting other cars and appreciating Syd Mead's works are always worth the trouble. Recommended, but be warned that this is a game where the cliché "style over substance" does apply. The style alone is worth trying out though, methinks ;) 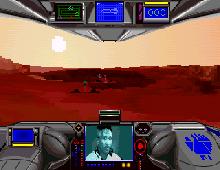 People who downloaded this game have also downloaded:
Lord of the Rings 1: Fellowship of the Ring, Wipeout XL (a.k.a. Wipeout 2097), Lord of The Rings 2: Two Towers, Nascar Racing 2, Fuzzy's World of Miniature Space Golf