Terrible cyberpunk racing game that could have been much more, CyberBykes sports unconvincing graphics, irritating soundtrack, and an extremely frustrating gameplay that takes far too much effort to be fun. It does offer a few novelties, including head-to-head play via modem or a network, and a built-in-editor. Unfortunately, Spectre VR and Activision's latest version of BattleZone also offer all these, and more. Simply put, the single-player game is a bust, and there are plenty of games with network support that are more fun than this. Good concept, bad execution-- like we have seen with so many other games before, and since. If you have one of the older VR glasses, you might want to try the game, since it was one of the first to offer compatibility with such devices. Otherwise, steer clear of this Real Dog. 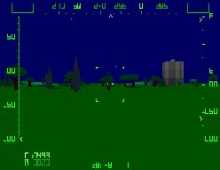