Big BumpZ is an addictive and original freeware wrestling game from Mat "MDickie" Dickie, maker of a fun series of wrestling game including Wrestling Mpire and Booking Mpire. In Big BumpZ, your goal is not to battle opponents in wrestling matches, but gain points in a wrestling "stunts tournament" by pulling off dozens of outrageous stunts. The crazier your move is, the more points you will be awarded. But at the same time, you have to be careful to perform the stunts correctly: a wrong move will hurt your wrestler, invite jeers from the crowd, and give you zero point. Incur too many self-inflicted damages, and your wrestler's hit point will drop to zero, thus ending your show. In tournament mode, you progress through a series of stunt performances, and have to do better than the performances of rival wrestlers.

As in all of MDickie's games, Big BumpZ offers a wide variety of options. You can change the appearance of your wrestler, choose the arena (performing daredevil stunts from a highrise is my favorite), the number of "dummy" opponents (to pull some wrestling stunts with), and even the number of objects in each location (which can be used to make your stunts even more convincing). The graphics is adequate and informative; I like how your character's appearance changes with the amount of injury he sustains. Keyboard-only controls take some getting used to, but once you do you will be delighted with the sheer number of moves you can pull (literally dozens of them).

I am by no means a wrestling fan, but if every wrestling game is this addictive, I will be a convert in no time. If you like masochistic games such as Truck Dismount or think wrestling games cannot be fun, Big BumpZ will be a pleasant surprise. 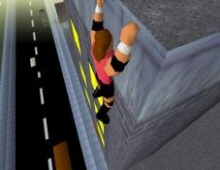