The legendary drinking game played at fraternities across the U.S. has finally reached the gaming world. Beirut comes to the computer screen with all the fun of real life -- without actually getting drunk or having pub brawls afterwards, unfortunately. For anyone who didn't have the privilege (or not) of attending college in the U.S., here's a brief synopsis of this popular drinking game that plays like a cross between bowling and beer guzzling contest: 15 paper cups filled with beer are arranged in a triangle like bowling pins on one end of a ping-pong table. The goal is to land a ping pong ball inside the opposite team's cups, one at a time. When one team scores a "hit", the opposing team must remove that cup and drink the beer in it. The winner is the team that hits all the cups, after which the losing side has to drink all their remaining cups on the table. Needless to say, the chance to get drunk with a good excuse of playing a game makes Beirut very popular in campuses nationwide ;)

This PC version of Beirut, coded by Lytol Software, is a good representation of the classic -- although the team spirit and brouhaha that make the actual game a lot of fun is naturally missing. Multiplayer support to play your buddies online through the Internet (via Lytol's server, for example) or in hot-seat mode, beautiful graphics, and reasonable ball physics makes this computer version a very good one. The user interface is also very easy to learn: the ENTER key controls power of your throw, and the arrow keys control the direction of the ball. Anyone who enjoys playing this game in bars will probably enjoy this freeware title, although it still can't beat the real thing. My advice: play this computer version to see how it works, then grab a few friends and hit a real bar to stage the actual game :) 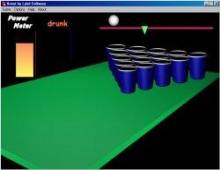 People who downloaded this game have also downloaded:
Biliardo 2, Lamborghini: American Challenge (a.k.a. Crazy Cars 3), One on One (Jordan vs. Bird), World Games