A rather unusual futuristic sports game that was definitely influenced by Bitmap Brother's Speedball. You control one of two arrows capable of shooting power balls. You have to shoot at game ball in order to move it around and eventually score a goal. Bumpers, sliders, gravity force and other things influence the ball's direction and speed and make the game very fast paced and interesting.

Ballistix is a decent - for its time - conversion of Reflection's fast-paced Amiga airhockey style game that is set in a fantasy scenario. The conversion was done by popular designers DMA Design, known for such great classics as Lemmings, Blood Money and Grand Theft Auto. The graphics look fairly poor compared to the Amiga game. The speech, sound and music of the original game have been lost in the depths of Ballistia. Still, for fans of unconventional sports games such as Speedball, Ballistix is well worth a look. 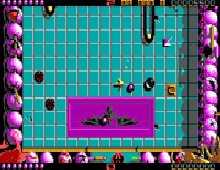 People who downloaded this game have also downloaded:
Jahanghir Khan's Squash, Creepers, One Step Beyond, Fury of the Furries, Lose Your Marbles