Nice little cat sports(?!) game with various fun stages, designed by Thomas Hertzler, nowadays president of Blue Byte. The controls are not really intiutive - so be sure to also download the manual below. The original C64 version featured great music by Chris Huelsbeck, which was supposed to be the first tune to use samples on the SID chip. Martin Galway's sample-using music for Arkanoid was the first on the market, though, as Bad Cat's release was delayed by three months. The game is reminiscent of Konami's underrated Boot Camp army drill game, only transported to a cartoonish setting. As a rawdy cat of the title, your task is to pass various obstacle courses, each more difficult than the last. 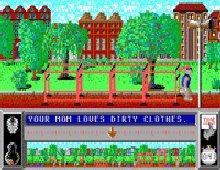