Alien Olympics is a decent PC conversion of an also-obscure Gameboy game of the same name, first released in 1992. The game is best described as Caveman Ugh-lympics fast forward to the future. Despite the zany settings and wacky names, Alien Olympics is essentially a collection of familiar sporting evens with slight modifications. Everyone will recognize that, for instance, "Toxicphilly" is just archery (albeit shot with a crossbow at targets pushed by little aliens), and "Alien Hurl" is shotput with appropriate substitutions of alien props.

What makes the game more interesting than many other funky sports games, though, is the fact that you have to choose your alter ego at the start of the game from various aliens, each of whom has unique strengths and weaknesses. The alien caterpillar, for example, is very good at shooting events, but very slow in races. Two players are allowed in hot-seat mode, although it's not very practical as the keyboard gets crowded rather quickly ;) The animations are funny, and the interface is intuitive - you can redefine control keys, or use joystick or gamepad to play the game.

With 15 events, Alien Olympics offers good play value and fun despite the relative lack of creativity in twisting conventional sports into something new (French developer ERE was much better at doing this, as evidenced by Project Neptune). Fans of Caveman Ugh-lympics or similar titles will likely find Alien Olympics a fun galactic romp, although it doesn't have quite as much charm as the Dynamix classic. 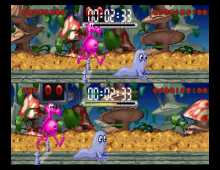