Now I've never been one of the greatest in playing football games... however I do see it as a bad sign when I cannot find a way to move the goalkeeper. Okay, I managed to let him lift his arm... but that's about everything. Limited by this I was naturally not too hard to beat by the computer who pretty much only needed to shoot at the goal to score. Well... I have to admit that this led to frustration. I am willing to accept though that it was just my usual low intelligence hindering me to find out how that @#!* goalkeeper could probably be convinced to do more than lift his arm in the hope to reach the ball without moving or even jumping. Apart from that playing is something like semi-enjoyable. If you can live with getting control over a player that's somewhere in the background instead of the one near the ball and of course an automatical switch once you approach the ball... I do have to be fair though - this does not happen all the time - only in the worst situations. ;)

While being normal in these days the 3D view was something totally revolutional back in 1995 and so it might not always seem to work out that great - the angle might switch just when you're trying to shoot... with the expected result of completely missing the goal.

You got two different modes in which you can play - simulation and arcade - the only difference between these two seemed to be though that in the latter the computer player is a little more dumb, thus giving you the chance to actually win (which I didn't manage...).

In case you find your way into the controls of this game (totally possible - don't give up just because I did ;) ) you can play in league or cup controlling the national team of your choice (while the accurate names seemed to be there I couldn't notice any impact on gameplay - all players seemed to be pretty much equal - "weaker" countries played more dumb though). Of course a quick friendly match is also possible. The game is designed for 1-4 players with keyboard or joystick (my joystick didn't seem to work though, couldn't test those controls - keyboard was more or less okay).

All in all this might actually be a good game if you want to take the time to dig into it - for those who just want to play a quick round this is not really a good choice.

Actua Soccer is one of the first soccer games ever that presents a true 3D environment and allows for up to 4 players to play on the same computer. The game is very long on atmosphere, with superb commentary from Andy Davies that greatly adds to the excitement.

While the gameplay is arguably inferior to 2D soccer games such as Sensible World of Soccer (curved balls are quite difficult to perform due to awkward controls, for example), graphics in Actua Soccer is used to great effect. There is a lot of good camera angles, an exceptionaly excellent option of Action Replays, stadium and crowd details, and great sound effects. All of these factors combined create all the atmosphere of a real-life match. You can choose to have a video wall, you can choose to have commentary provided by Barry Davies.... you can even choose what direction you want the tractor to cut the turf. You can play any of the 44 international teams, each with 22 players, each of whom with 8 individual skill factors that do make an impact. You can customise cups, leagues and teams/players to your heart's content, and infinite camera angles let you watch the players from every perspective.

Overall, Actua Soccer deserves recognition as one of the pioneers in 3D soccer games, and it was years ahead of EA's better-known FIFA Soccer at the time of release. Actua Soccer won't dethrone the likes of Kick Off 3 as arcade-soccer classics, but it offers enough adrenaline rush and "you-are-there" impression to make it an addictive game. Highly recommended! 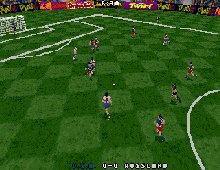