Designer of excellent sport simulations broke the mold with this rare arcade-oriented soccer game. Choose among many European teams and compete in well-known events such as the UEFA Cup. The game offers standard options such as choosing formation and substitute, but as an arcade-oriented game it falls short of its competition. Good for a quick diversion only. 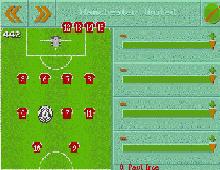