One of the best examples of Japanese developers (or more precisely Enix)' wonderfully original take on games, Wonder Project J (released only for the Super Nintendo) is a highly underrated game that defies categorization. It is a rare game that combines elements from a whole breadth of genres, from puzzle, to RPG, simulation, and adventure, into a satisfying and wholly original old game that is greater than the sum of its parts.

The game's plot is inspired by classic Pinocchio story. You control Pino, a lifelike boy robot (called "Gijin" in the game) whose inventor was arrested. With the help of a faerie, you must help Pino activate seven "Heart Circuits" in his body as well as the mysterious "Circuit J" that may be a solution to end the growing friction between humans and the Gijin race.

The gameplay is a more plot-based version of Creatures, with a lot higher emotional involvement and charm. The playing screen consists of a graphical display of Pino and the surroundings, a bottom menu bar (which includes your inventory, money display, and more), and flying Tinker (like Cricket in the Pinocchio story) who acts as both your guide and the cursor: she moves objects in and out of Pino's inventory for you, etc. The bulk of gameplay consists in teaching Pino to learn new skills and, like in Princess Maker games, teach him to be a nice person. The plot is developed in an episodic nature: each new Act requires you to perform certain tasks (such as rescuing a fellow Gijin) that can only be done by teaching Pino appropriate skills. Most tasks and skills must also be learned in order: for example, Pino must learn how to read before learning how to use a computer. This makes the game more akin to an adventure game than a freeform life simulation like Creatures. One of the most enjoyable aspects of the game is the fun (and funny) experiments Pino will perform when you introduce a new object to him. To teach Pino the correct interaction, you use a simple but effective combination of praise and scolding. If you want Pino to throw the ball instead of, say, sniffing it, you have to praise him every time he throws the ball so that he learns that is the "correct" action. To make Pino "unlearn" something, e.g. disassociate "ball" with "throwing," you must scold him instead. Seeing Pino perform "wrong" actions, such as shouting "open Sesame!" at the door or throw a book, is very entertaining, and will make you care for Pino in a much more meaningful way than any Norn or Tamagotchi can.

Almost every action Pino performs affects one or more of his personal abilities, as well as the four major measures - strength, intelligence, energy, and kindness. The level of each meter affects how Pino acts in the game, and finding the "right" balance is important. For example, if the kindness meter is too low, he will be mean to people and animals. But if it's too high, he will run away from fights. Time passes in the game, but only when Pino sleeps, breaks down, or travels. If Pino becomes exhausted, you must replenish his energy with oil. You will spend most of your time either teaching Pino new things, or increase his stats via practice and exercise (for instance, swinging a sword increases Pino's arm strength). Solving puzzles in the game is not too difficult, because the solutions are straightforward: they require Pino to perform the right action, with all relevant abilities at a minimum level required.

With tons of objects to interact with, plenty of charming character, a unique gameplay, and above all the charming main protagonist whom you will grow quite fond of, Wonder Project J is a wonderful game that is both addictive and heartwarming at the same time. The game even has multiple endings (after you beat it the first time, you can play another mode to unlock the optimal ending) to boot. Like many classics from Japan, the cutesy anime graphics of Wonder Project J and easy of use betray a sophisticated gameplay that requires a combination of reflexes, thought, and timing to succeed. If you love Little Computer People, Princess Maker or similar games, you simply must try this old game that is available in English for the first time, thanks to the efforts of LordTech and WakdHacks, a fan group dedicated to translating Japanese-only console games. 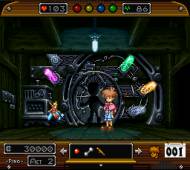