Wasteland Rebels is a fun little ASCII-based battle simulator based on Japan's popular Macross (called Robotech in the West) universe. In this Rebellion (your side) vs. the Ranzei (enemy side) galactic conflict, the gameplay is deceptively simple: you control a ship and 2 wingmen, engaging in one battle after another against Ranzei ships. During each turn in battle, you choose which weapon to fire, and your wingmen will also attack although you cannot choose weapon for them. You have to watch the damage levels of all three ships to decide whether it is time to flee, as well as deflector shield power level, the number of missiles left, and beam cannon charges. You can also transfer energy from your gun to your shields, similar to Wing Commander, to react to the battle situation.

Part of the fun of Wasteland Rebels is encountering new enemy ships and new planets or installations. From time to time, you will come across new worlds and will be told their attitude to the Rebellion. They could already be supporting the Rebellion (in which case you could dock and repair your fleet there), or indifferent, or openly hostile. You will gain victory points for each enemy ship killed and each planet won over to your side; getting 1,000 or more means the Rebellion has won the war. You will also come across trade depots, at which you can repair your ships or buy and sell missiles.

Wasteland Rebels is not a complicated game, but a charming one that will appeal to both Robotech fans and anyone who enjoys a solid text-based game. I had a lot of fun with it, although the gameplay does get repetitive after the 30th or so battle ;) Recommended. 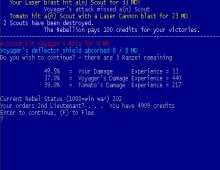