From the readme, "This program was created as a programming aid: to help WadeSoft decipher various file formats, such as .WAV and .TGA files. It can be used for this purpose as well as another - to help gamers "cheat". As well as a programmers' best friend, this utility can be also be the gamers' most valued program."

In essence, this program was an ancient programming tool for WadeSoft, and both version 1.0 (for download here) and the much-improved version 2.0 were made freeware in 1996. I have used the program for several things, and I found it tremendously useful. It still works today :) 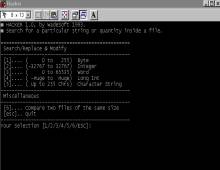