War in The Gulf

The final and best game in the trilogy that encompasses Team Yankee and Pacific Islands centers on the The Gulf War of 1992. The similarity between this and the previous games is obvious: the same basic game engine is there, the layout is exactly the same, except this time the graphics seem somewhat more 'orange' to reflect the sand in the Gulf.

What makes War in The Gulf very different from its predecessor is a greatly improved enemy AI. While certainly not cutting edge, the AI can spot holes in your strategies and tank formations and quickly take advantage of that. The computer will now insidiously hide large numbers of troops on the dirt tracks in the forests and jungles, waiting for the perfect moment to ambush you. This requires very thorough scouting and cautious planning-- something that wasn't quite so involved in either Team Yankee or Pacific Islands.

Another feature in the game that is new to the series is the role of money, which adds an all-new dimension to planning. An essential part of War in the Gulf is raising funds through the destruction of enemy military installations, but any civilian buildings lost will cause money to be deducted. The game therefore requires a sharp eye and quick thinking to stay on top of things and make sure you have enough funds to buy new units. Sound and graphics are not much different from the predecessors, although as mentioned earlier the orange tone makes it difficult to spot enemy tanks. The terrain is sparse, although that's typical of desert environment. Unit graphics though seem to be more sharply defined and better animated.

Overall, War in The Gulf is definitely the best game in the trilogy of tank sims from Empire. It's still not as realistic as many would hope, but it's still a lot of fun, and the ability to switch your point of view to any one of 4 tanks at a time makes for some exciting moments... especially when you realize you've been ambushed. Recommended for fans of tank simulations and military action games, but be warned of a VERY difficult last mission which I've never been able to complete. 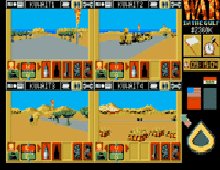 War in The Gulf screenshot