Wall$treet is a fun but very obscure stock market simulation developed by German publisher Falken Verlag, who was better known as a book publisher (and now owned by Random House). Published only in Germany and a few other European countries, Wall $treet was not commercially successful - most likely because it was in many ways ahead of its time.

Compared to modern stock market sims such as Wall $treet Raider (my most favorite) from Ronin, Wall$treet is outdated and primitive by comparison. However, by 1988 standards it was better than most, featuring dozens of stocks and a reasonably realistic stock market that reacts to corporate news and world events the way you would expect it to. There are several nice touches that make Wall$treet more than just a simple stock market simulation. For example, you can take a "beginning test" before you start the game. This is a multiple-choice quiz that tests basic knowledge about stocks and other financial instruments. In contrast to other early stock market sims, interest rates are modelled quite nicely in Wall $treet: instead of just waiting for the right time to buy stocks, you can push a certain amount of cash into a regular saving account which would earn a certain interest. Certain stocks also pay dividends, and the game includes a nice text-only program that lets you do all the calculations quickly without the graphical interface.

Overall, I am quite impressed by what Falken managed to achieve with Wall$treet, given 1988 technology. There are several quirks, but they are merely small annoyances in this fun game (your portfolio is called "depot" for example - typical of the German-to-English translation problems). With dozens of stocks in several industries, dozens of different news, and a good financial model behind it, Wall$treet will entertain armchair investors and even educate newbies on the relationship between savings and investment. Recommended! 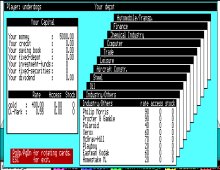 People who downloaded this game have also downloaded:
Tycoon: The Commodity Market Simulation, SimTower, Stocks & Shares, Stock Market: The Game, What They Don't Teach You At Harvard Business School