Visions of The Aftermath: Boomtown

Boomtown is a novel attempt at simulating post-apocalyptic life. Althought it may look like an RPG at first glance, the strong simulation focus surfaces soon after the computer builds you a new random world. You must buy provisions and other survival tools, then head out into the wasteland to cultivate fields, hunt animals, and try to last the longest in this harsh land. Overall, it's an interesting and unique simulation-- first in a planned series that never materialized. 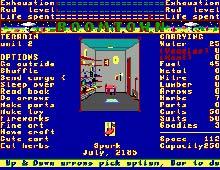 Visions of The Aftermath: Boomtown screenshot