Simsheep 2 is a humorous 'virtual pet' simulation in the same vein as Tamagotchi or Creatures series. You are put in control of every facet of a sheep's life, from simple things like finding him food and friends, to more interesting aspects such as deciding whether to make him good or evil (if you never thought a sheep could be morally inclined, here's your chance to find out how).

The good/evil choice alone makes the game a lot of fun, because, interestingly enough, each of them offers both advantages and disadvantages. You might think being good can only bring all the good things, but that's not the case here. While a 'good' sheep finds it easier to make sheep friends, an 'evil' sheep is physically stronger than a good sheep, and can eat dead sheep to cure his hunger more quickly. Your sheep can have sex with other sheep on the farm to produce little lambs, throw a party for them, or you can simply kill them for food. You can even be enterprising and sell your friends to the slaughterhouse to buy yourself a TV.

The game is humorous, fun, and quite accessible with a clearly laid out interface at the bottom of the screen. You can always see various stats of your sheep including health level and 'morality gauge.' The game does fall flat after a while, though, after you try all the options available. Unlike Creatures, Simsheep 2 doesn't have any cool gadgets or toys you can use to change your sheep's behavior. But again, considering that this is a freeware game developed by a non-programmer using Klik & Play application, the game is a laudable effort. If you enjoy virtual pet programs, Simsheep 2 will at least offer a few hours of engrossing and humorous fun. 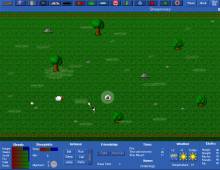