Search & Destroy and Up! Periscope are two early submarine sims have a lot in common even though they were produced by publishers who lived thousands of miles across: Search & Destroy was designed and released in the U.S. while Up Periscope! was released in Europe. Both are excellent submarine simulations although Search and Destroy had a more action-oriented focus than its cousin.

Up Periscope! is better in terms of realistic feel, game interface, and has more interesting missions. It also originated a few new ideas that were not implemented well, such as the concept of variable visibility. Further, the user had to make several periscope, radar, or sonar contacts at different times to generate an accurate shooting solution. A minimum of two marks was required to fire using the TCD in manual. This added to the realism and difficulty but the drawback was once you fired at a specific ship in a convoy, you couldn't transfer the settings to the next ship for a second shot. 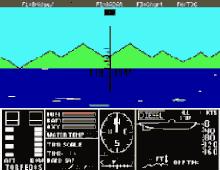