Search and Rescue is a fun helicopter simulation offering a variety of mission type that is not commonly depicted in games: rescue operations. Billed ambitiously as "the greatest and most realistic helicopter flight sim ever!", the game does not quite live up to its billing - after all, it would have to be significantly more realistic than heavyweights like Jane's Longbow series to win that honor. But it DOES offer semi-realistic physics and a variety of fun missions.

The game lets you fly 12 helicopters, each of which is based on a different flight model. Some helicopters you can fly are not available anywhere else: the Sky Crane, Gazelle, Jetranger, and Dauphin to name a few. Similarly, the types of missions you can fly are varied, challenging, and fun. The rescue operations range from mundane (rescue at sea, fire fighting, police assistance, etc.) to the unusual (wildlife herding, stunt-flying, etc.) to the fanciful (UFO-hunts - my favorite kind of mission although it is not exactly a "rescue operation" ;)). In all, there are 46 missions to fly, spanning many different scenarios and terrain types from jungle rescue and combat support, to African deserts and ice-sea oil rig missions. I find some missions much more difficult than others (wildlife herding in particular), and some involving too long a wait for something to happen. But overall, the difficulty level is quite well-balanced and fair, especially since the game lets you fly the harder missions only after you have finished the easier ones. The game is probably too easy for veteran armchair pilots, though, because the handling feels overly simplistic for most helicopters. And after a while, missions DO begin to feel repetitive despite varying objectives: most of them involves going somewhere, dropping or grabbing something, and getting the hell out :)

The graphics is very good, even compared to today's sims: the terrain is texture-mapped in SVGA with almost no pixelation, even after you fly below 1,000 feet (which seems to be the 'limit' of most other older sims - Strike Commander terrain for instance becomes horribly pixelated below that altitude). There is a wide variety of ground features including houses, roads, moving cars, and more. The game's detailed weather engine supports rain, snow, different light conditions, drifting and changing clouds and skies. It all makes the game overall quite pretty, and stand the test of time well.

Although I am by no means a die-hard fan of flight sims (the only ones I managed to complete were Red Baron and Stunt Island, if space combat sims are excluded), I had a lot of fun with Search and Rescue, having completed 20-25 missions before it became too hard for my puny skills :) Fun, interesting, semi-realistic, and definitely unique at the time it came out, this game is recommended to fans of unconventional flight sims who don't mind the simplicity too much. 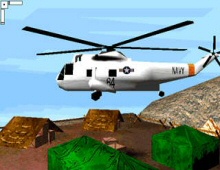