An excellent World War 2 tank simulation that went unnoticed by many, Sands of Fire puts you in control of the American tank unit that ranges from 1 to 6 tanks in the war efforts to halt the German advances. You can hop from station to station effortlessly, driving the tank and manning the guns at the same time. The AI is a little smarter than rocks, but the diverse missions, good training mode, and decent realism makes this a good game for newbies. 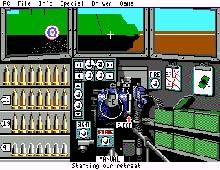