The Sandbox of God is a fun "god simulation" from Mr. Chubigans that is inspired by Grow, a fun on-line Flash game coded by Japanese group EYEZMAZE, although Mr. Chubigans curiously chose not to credit this inspiration in the README file but only at the end of the game.

As to the game itself, Sandbox of God has a lot to offer, especially for fans of Grow who wished the game were longer. The review at Gamemakergames.com says it all: "Sandbox of God isn't exactly dead-on accurate in it's representation of life/evolution on earth, but it's a fun, light-hearted, and; perhaps most importantly; creative take on playing god.

The "gameplay" here entails clicking buttons in different orders, and that's it. The clean and simple interface makes the game incredibly pick-up-and-playable, so anyone can start the game in two seconds and know what they're doing. Plus, the author has included a help system for even the most basic functions. I really believe anyone who can read can also play this game. Keep in mind, though, that this doesn't make the game easy - easy to pick up it is, easy to master it is not.

But how can it be so hard to master if all you do is click buttons? Because the order in which you click them greatly influences their effects. The first time you play this game, you'll most likely get close to the worst rank possible. The game's unique puzzles take some getting used to, and having knowledge of the abilities you'll be given next turn will help you decide what course of action to take. In other words, beating the game once isn't enough. You can click buttons randomly and beat it, but beating it with a good rank is the hard part.

Now the cons... The fancy effects look good the first time through, but after that they resemble un-skippable cutscenes you've seen 100 times before. You'll want to speed through the process of dishing out miracles/plagues to see your score while the game is taking it's sweet time. Also, a few (very few) effects don't seem to match the actions that brought them on. For example, I don't understand how a sign from god can increase man's IQ by 10 points. If these issues seem petty, well, it's because they are. I'm just going through the motions here, these cons really didn't bug me all that much, and they're the only flaws I found in the gameplay."

Although more of a puzzle game than a full-fledged life simulation, I categorized The Sandbox of God as a "life simulation" on this site because - well - you are playing God after all :) Overall, fans of life sims or "God games" like Populous will find this game a unique, engaging, and clever puzzle/simulation game about the relationship of mankind and nature. 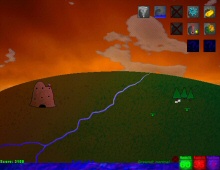