Reach for The Skies

Following their success with Flight of the Intruder, Rowan's second flight sim focused on WWII's famous "Battle of Britain". Reach for the Skies is an excellent combat flight simulator giving you the option to take part in the war either at the Royal Air Force or the German Luftwaffe. You can play as a controller or a pilot or both. Eight planes are simulated, each with their own cockpit displays and characteristics. All in all a polished sim, nicely presented with enough features and realism to offer to be up there with other classics covering the same scenario, such as LucasFilm Games' Their Finest Hour, although much less unknown. A must-have for every sim fan!

Note: The game only works 100% in pure DOS mode. It runs under Windows but very slow, buggy and without sound. To install, use SUBST or copy the four folders onto four floppy disks. It's not cracked, so be sure to crack it with Crock program first. 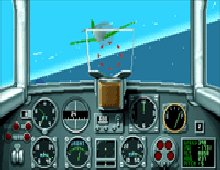 Reach for The Skies screenshot

People who downloaded this game have also downloaded:
Red Baron, Aces of The Pacific, Longbow 2, Aces over Europe