Predating Virgin Interactive's underrated Shuttle by several years, Orbiter is a decent space shuttle simulation that unfortunately is bogged down with too much "realism" to be fun. As commander of a space shuttle, you select from 4 different types of missions (rendezvous, satellite repair, satellite deployment, or training mission), within each of which you can choose to control any or all of the 3 stages: launch, orbit, and landing. A detailed scoring system evaluates your performance in every stage, and almost every system imaginable on the real space shuttle is meticulously modelled in the game. The problem is, the game quickly degenerates into an exercise in frustration due to complicated user interface that uses multiple windows and viewpoints, poor CGA graphics (EGA, which was widely used in gaming in 1988, was curiously omitted in Orbiter), and lack of campaign mode a la Shuttle. Overall, a commendable effort, but one best experienced only by expert space sim enthusiasts. 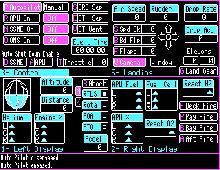