One of the rarest Epyx games ever made, Oil Barons is a fun turn-based business strategy game for one to eight players. From Mobygames' description: "...[the] object of the game is to accumulate the most wealth by locating and drilling for oil. During the game you will need to survey different lands ranging from the arctic to the desert for oil potential, choose the best sites and drill! Congress may pass bills from time to time which forbid drilling in parks and other reserved lands, which may or may not affect a players strategy. Several modes of gameplay are featured, including regular classic, reality mode (oil locations are more randomized at the beginning of the game, and costs are supposed to more closely resemble those in real life), and customized modes. Included with the game is a game board with a 50x40 grid of the landscapes you can drill in, and dozens of game pieces to keep track of which locations belong to a player and where oil has (or has not) been discovered. This makes Oil Barons resemble a board game, but with a computer to do the bookkeeping and add a random element instead of dice."

While the game is neither as realistic nor offering as many options as the 1992 Oil Barons by Earl Long of Starsoft, this Epyx version is still entertaining, and has more of a strong board game feel than Starsoft version. So if you enjoy the likes of M.U.L.E. or Cartel$ & Cutthroat$, you will likely find Oil Barons a fun "light" business game that is best played against friends in hot-seat mode. Recommended! 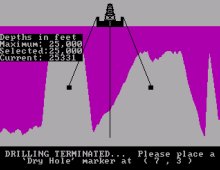