Oil Barons is a great business sim about the oil industry that successfully simulates the ins and outs of the business, including many characteristics that are peculiar to the industry (e.g. setting cartel prices via domestic and foreign lobbying, dealing with oil spills, etc.) Up to four players can compete from 1-10 years in the business, the goal in which is --of course-- to make the most money. The game is turn-based, with each turn representing six months in game time, during which you can make decisions ranging from the number of barrels to release the refineries, to the amount of research & development. You can also speculate in the stock market to diversify your portfolio, although the risks are high. There are many nice realistic touches in the game that I really like, such as bankruptcy options. In most business sims, going bankrupt ends the game. Not so in Oil Barons. Realistically, being declared bankrupt is an opportunity for you to raise quick cash to repay your debts (i.e. by liquidating assets), and you can choose to do it voluntarily or forced by court in the game.

Overall, I thoroughly enjoy Oil Barons for its excellent economic model and gameplay options, even if some macroeconomic variables (e.g. oil prices) seem a bit random. If you like reLINE's Oil Imperium but want stronger emphasis on the financial side of the business, you can't do better than this forgotten old game. Although the game is a bit difficult to master, excellent in-game manual and tutorial go a long way towards easing the learning curve. Highly recommended. 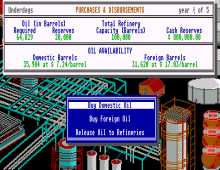