One of the best and most underrated "virtual pet" programs ever made, Oddballz is a great program that deserves much more notice. Comprehensive review at MacNN says it all about this game:

"P.F. Magic is much better known for their Dogz and Catz series. When they came out with Oddballz, the public just didn't show enough interest. They went on to make sequels of Dogz and Catz, all the way up to Petz 5, and at one point re-released Oddballz for a short time, but once again sales flopped. When publishing rights for P.F. Magic's games were bought by Ubi Soft, they declined the rights to Oddballz, and thus it was left to stagnate forevermore.

[In my opinion, this game] deserved a lot more attention than it got. Perhaps not the most in-depth virtual pet game ever, but certainly one of the most humorous, with tremendous replay value. The whole game starts with a selection of eggs, all neatly arranged in your incubator. You pick one out and set it on the screen, and out pops one of the thirteen included Oddballz. Watch it as it opens its eyes for the first time, and take a picture to add to your scrap book. You'll want to take pictures along the way as your creature grows and learns new tricks. They'll all be neatly stored for you so you can watch a slide show of its life at any point during the game. After the hatching process, your Oddball will be hungry for some Grubz. Grubz are what your Oddball eats for a tasty snack. However, it's also your training tool for teaching the creature new tricks. Dangle a Grubz in front of your Oddball to teach it a new trick. If you like the trick, then reward the Oddball by dropping the grub and letting it slurp up the juicy bug. Grubz come in a variety of colors and flavors, and can be quickly retrieved from the dispenser at the bottom of the toy module. In fact, just about everything in Oddballz is as easy as a click and drag.

[There are many available toys in the game]. First, there's the Transformer. Grab this special device from your Toy Module and take aim at your Oddball. The gun shoots a blast and transforms your creature into its "inner self". Each Oddball has a few different identities that it momentarily changes to. These can include anything from pigs to monkeys or even slugs. The Gravitron attracts your Oddball to it, and when it gets close the Gravitron shrinks the creature to a smaller size. This effect is temporary and you'll notice your Oddball slowly grow back to normal size within a few minutes. There's also an atomic ball, which you throw across the screen and the Oddball fetches for you. If the Oddball doesn't fetch it, you know what to do.

Next up is the Robo Pogo which bounces around like a possessed pogo stick. Your Oddball hops on the toy and takes a short ride until it jumps or falls off. Finally, use the Pop Box to get some tunes playing and watch your Oddballz get jiggy with the song. Each Oddball has its own distinct personality, and some won't like certain toys. You'll quickly pick up on these tendencies and take note of them in your manual or on screen in your Notebook. Even with these seemingly nice variety of toys to play with and tricks to teach, things can quickly become boring with a single Oddball. You'll probably find yourself switching between Oddballz often to keep things as lively as possible. Putting away an Oddball is as easy as picking it up and dropping it into the incubator.

Oddballz takes the usual aspects of virtual life and adds a wacky side order of crazy creatures. Choosing from creatures such as the Norvil, Snowbo or 102, you nurture these wackos from newly hatched babies to fully-trained adult Oddballz. Feed them, play with them, turn out the lights and see how they respond. Take pictures of your Oddball as they grow and mature. If you can keep things lively with frequent swaps between creatures, then you can let yourself enjoy the experience of Oddballz. Also, it's a simple matter to switch petz (is that the right spelling?) by dropping the current one in the old recycler and grabbing a new egg. As is the case with Dogz and Catz, the Oddbalz grow older, and their personalities change as a result. I recommend this offering to harried office types, and also to anyone else of all ages that enjoy good clean fun on the desktop." 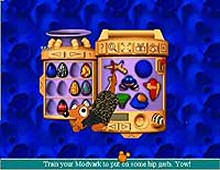