Motor City gives you a unique opportunity to see how hard it was to become a car tycoon. You will be in charge of a complete company and you will have to control just about everything, FROM hiring workers and engineers to designing cars and opening branches throughout Europe! And it's fun! The game starts at the beginning of the 20th century and slowly takes you forward to the modern ages. The first engines and car parts you will produce are simple and actually funny, but as you progress and (hopefully) get richer, you will be able to build your own factories, research buildings and other useful things. Marketing, test driving, opening offices and beating competition... not for the weak-hearted. The game also pays attention to historical events and updates country borders as they change in World Wars! Sadly, this game went through unnoticed and it is much better than it's rival, Impressions' Detroit.

The last game developed and published by Austrian developer Max Design before they were bought out by Sunflowers, Motor City (marketed in Germany as Oldtimer) is an excellent simulation of the car industry that is sadly not as well known as Impressions' Detroit. Although they both tackle the same subject matter, Motor City is a much better game due to a more realistic and versatile economics model that underlies the game.

The idea in Motor City will be familiar to Detroit players: as manager of a fledgling car company, your job is to expand your business by designing and selling cars. Similar to Detroit, most of the time you will be looking at the premises of your company, on which you start with only two buildings: administration, and warehouse. Motor City includes many more options and details that Detroit lacks. For example, before you can build a car you must choose general concepts, e.g. size (small, medium, or large), whether its roof can be opened, chassis type, and engine type. All these components cost money, of course. Since building cars take time to complete (and the time varies depending on how many bells & whistles you add to it) but you have fixed costs to pay every month, having a long-term business plan, including astute timing of when to market new models, is crucial to winning the game. There are numerous statistics you can access at any time to see how you faring in the industry, from overall financial position to track record and trends.

Overall, I am very impressed with Motor City's depth and variety of options. Detroit is a lot of fun, but it often feels as if it could have been about any other industry had Impressions substitute cars with other products. Motor City, on the other hand, contains many industry-specific details that aren't common to other industries. The bottom line is, if you want a more sophisticated business simulation than Detroit, Motor City is a must-have. It may not be as accessible as Detroit, but its economic model is hard to beat (and quite educational as you put more time into studying how the market works).

This is one of my personal favourites! The game idea is a bit like Detroit, but this one is way more complicated and way more advanced than the game Detroit.

You own a company, a car factory. Your goal is to build cars that everyone wants so you can make lots of money out it. What you first have is an almost empty lot, with an administration building and a warehouse. A train track is leading straight through the middle. Build things like a research department, a factory or a storage place. You climb your way up from the most simple 1-cilinder 5 HP cars to the most luxury limousines. Become the greatest car factory in the world.

But ok, I recommend this game over Detroit, but if you like this game, you might want to try Detroit too.

Motor City is your chance to experience Europe's car market from the end of the 19th century up to modern times. The game was developed and released by Max Design as a last production under their own label and is proably the best (and hardest) conversion of the intriguing business of the early automobile industry. You are in charge of a complete production facilty including production halls, research and administration and have to develop, build and market cars in order to stay in front of your competiton. With the upcoming racing sports in the early 20th century you may even construct your own race cars and are able to test-drive them yourself in order to frighten your opponents at the sight of their power.

After viewing the intro, you can choose your player's name, the name of the company and the country it is settled. The last decision will have a big influence on the course of the game, as it is historically oriented and features all major political and economical events (like wars, etc.) of the aera. Motor City supports two players in hot seat mode and three levels of difficulty. All trade simulation beginners are strongly recommended to select the easy level, as the game has one of the most differentiated business models I've ever seen. You have a lot of statistics to estimate your business success and some other indicators as well. Therefore this game needs a lot of planning skill and a feel for the right opportunity, even if it looks rather simple at first glance.

At the beginning of the game, you find yourself in your office. This is the place all your activities are centered in. On your desk lies the account book, which contains most of the statistics and your customer's orders. Your desk has three drawers. The first one should only be used if your are on the brink of ruin (car market is a hard business...). The second drawer contains the game's options like load, save, quit , etc., and in the third you'll find some non-car related photos. The bookshelf in the corner is a treasure for all history inspired people, as the whole development of the automobile, from the beginning up to modern times, can be looked up here. On the wall you see a map of Europe, which keeps the menu to administrate your sales and dealer's discounts and enables you to open new branches in other parts of the continent. Finally a quick step out of your office takes you to the staff-office, where you can hire and fire employees or just look up the staff numbers.

The rest of the game takes place outside your office. A click on the window takes you to the factory grounds, where you can construct and access all other buildings. At the beginning you have nothing more than a storage and a small administration building. The first thing to do is to build a small research facility, which is needed to develop prototypes and to research new spareparts. A car in Motor City always consists of three parts: an engine, a chassis and a body. Each of these are available for different car sizes and can be imported or built in your own factories. The storage is not only used to store your parts and cars, but also for inquiring offers from your suppliers and placing orders. You should watch your stock closely, as whole production lines stand still if only one component is missing, and you should expect delivery problems from time to time.

The game has some wonderful graphics and features even 3D-rendered objects in the library of the history of car. In addition to that a racing engine is built in, which is not as good as in some racing games of that time, but quite well done. The music is of usual Max Design quality and sounds very pleasant. As for the interface, the game is controlled entirely by mouse and actions are made through various dialogues with your employees or the friendy bank manager. In order to type in numbers (for cash transfers, orders of goods, etc.) the game features a very nice cash register, which appears whenever you have to determine any amount. This feature is a great improvement to former Max Design games and easy to use.

In conclusion, Motor City deserves nothing else than a straight 5. Although the game is very hard for beginners, you will have much fun playing and be even edutained a bit, probably without even noticing it. All of you, who have played Detroit and found that the game lacks some depth... Motor City will fulfill all your wishes, as it is much more original than its older brother. Just be sure not to use the first drawer too often... 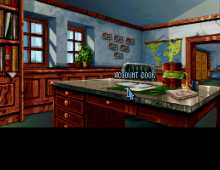