The latest and most complete version of Aaron Massey's lunar colony simulation that started with Moonbase and followed by Lunar Command. Although Lunar Commander 2 does not look very different from its 1993 version, the game features a lot of parameter tweaks to supposedly make the game more challenging and realistic - although I can't really tell the difference. For those who have never played Moonbase or Lunar Command: the game is essentially "SimLunar Colony," i.e. you are tasked with building a colony on the moon, and make it economically self-sufficient via mining and selling the resources to Earth in return for cash needed to expand. There are very few structures you can build, but as the game's emphasis is on economics, that is not a major constraint. The game is reasonably realistic in a sense that it was designed to explore the feasibility of lunar colonization, so all the elements of the game are as closely based on actual NASA estimates as possible. Although it has a very limited scope (this is not a science-fiction, 4X game after all), Lunar Commander 2 should appeal to die-hard simulation fans or space buffs who are intrigued by the idea and want to play around with the parameters. Recommended - but not if you cannot stand "spreadsheet"-style, dry simulations. 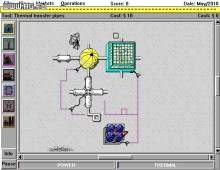