Jetset is a primitive ASCII-only flight simulator program coded entirely in BASIC. This version is coded from the BASIC codes printed in an early BYTE! Magazine, sometime around 1979. You control the plane from a first-person perspective, watching all the gauges and dials as you try to take off, fly the plane, and eventually land. Although short on realistic scenery (there's not much you can do with ASCII graphics to represent terrain), the game is long on realism and playability, offering a surprisingly robust physics model given the limitations of BASIC language. Well worth a look, especially to armchair pilots who collect mouldy oldie flight programs. Who knows, this could very well be the first PC flight simulation game in existence ;) 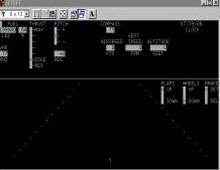