A disappointing fourth entry in SSI's Great Naval Battles series. M. Evan Brooks, veteran wargame reviewer, says it all in his capsule review of the game:

"The series returned to the European Theater of Operations, only to find that there was nothing left to do. Instead of starting something new, SSI attempted to obtain blood from a turnip, only the gamer turned out to be the turnip. A modified interface coupled with air operations and numerous bugs and semi-complete patches led to unnecessary frustration. If it could have only been left to rest in peace ..." Ouch ;) 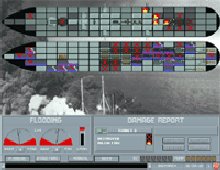