Great Naval Battles 1 and 2 were detailed simulation of World War naval operations that, in M. Evan. Brooks' words, are "historically detailed and recommended to the aficionado of the period. While the AI often suffered in the campaign game, it was still the standard-bearer of the genre." However, he thinks Great Naval Battles 3, is disappointing: "Covering the remainder of the Pacific, this simulation met a less-than-resounding welcome from gamers. Bug-ridden, it required numerous patches in order to become semi-playable. The entire system seemed to stretch in order to adequately cover the air operations, and since the system was ostensibly for surface warfare adherents, the entire direction of the design seemed to become suspect." 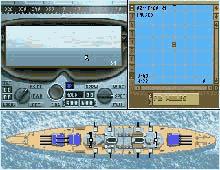