Description at MobyGames says it all about this quirky piece of software gaming history - made back when Software Toolworks was still called "Software Library" :)

"Probably the first retro-collection ever foisted upon the buying public, [Golden Oldies is a] collection of 4 classic computer games (well, 3 computer games and an adaptation of an electronic video game.) Play Eliza, Conway's Life, Crowther's Adventure, or Al Alcorn's Pong. All 4 games are liberal adaptations- there is no standard Eliza, and this versions seems to lack compared to others. Pong is an ASCII rendition of the game (and includes a remake with color!) Life, however, includes various pre-formed populations, including the infamous glider-gun that figures prominently in the book "Hackers" by Steven Levy."

The games are not as fun as their originals (except Adventure, which is exactly the same game I remember playing), but they are good enough to give you a good sense of nostalgia... and a peek of how gaming looked in 1984 :) Recommended if you collect oldies, but probably won't be of interest to a casual gamer. 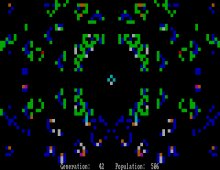