Gold of the Americas

Colonization of the New World. Choose between one of the colonial empires (England, France, Spain or Holland) explore the unknown lands, colonize, fight the natives, conquer enemy colonies... You can even employ privateers to sink and plunder enemy cargo ships. True masterpiece of its kind.

One of the few SSG classics that are not based on World War II, Gold of the Americas is an excellent strategy/conquest game set in the Americas. Unlike better-known games of this gene (e.g. Sid Meier's Colonization, Pirates!), GoA emphasizes strategic-level decisions and diplomacy over tactical-level colony management.

The gameworld consists of North and South America, divided into 31 land and 4 sea areas. There are 7 types of units to choose from (Armies, Colonists, Trading Ships, Warships, Privateers, Slaves and Explorers), all of whom are crucial to success. You play one of the European powers vying to control the New World: Spain, Portugal, England and France. Your mission, in game terms, is to end the game with the highest amount of Victory Points (VPs) at the end of 30 turns (equivalent to 300 years); at the end, you get 1 VP for every colony level you have.

Being a strategic-level game, there is no movement of units as such in GoA: everything is "placed" on the map. Ships stay at sea unless they are moved, and all armies and warships only last 1 turn (10 years), so there is no way to build up a huge fleet or invasion force-- all your decisions must be made in the context of the current turn, and how to maximize the use of these transient units. Trading is simple: you just place your trade ships in any sea area you wish, and hope that your Competitors don't sink them or Privateers don't loot them.

The hallmark of GoA which makes it much more historically accurate than other Colonial-era games, is the taxation module. True to history, you have two coffers in the game: the main Treasury and your Secret Funds. Taxation is assessed as a percentage of your previous turn's earnings (which goes directly into Treasury). The failure to meet your tax bill results in less interest from the King, which in turn results in less resources you receive from him (armies, etc.) Trading, raids and exploration all have the potential to add funds to your Secret Fund, which you can use for whatever you want. If you let it build up too high, you will rouse suspicion form the motherland, which might mean a visit from the King's Auditing Department, which is very unpleasant :) Needless to say, careful management and allocation of the two coffers are crucial to winning the game with high VPs.

Overall, GoA is a great strategy game that is both historically accurate and addictive. Perfect for fans of SSI's No Greater Glory, and SSG fans in general. SSG's famous AI does not disappoint-- it is one of the best AIs you'll find in this type of game, bar none. 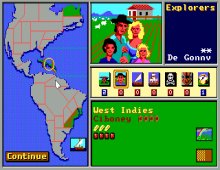 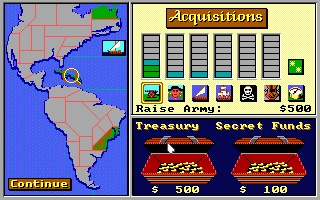 Gold of the Americas screenshots